Kelsey Montague is an American mural artist who is known for her wing-inspired artworks on the walls of major cities like New York and Buenos Aires. The New York based painter, who hails from a family of artists, was quite young when she started painting. The well-traveled muralist, who loves to incorporate her experiences into her work, has emerged as one of the most admired artists on social media.

One of the biggest reasons behind her popularity among the younger generation is that she encourages them to express themselves on social media through her art. Her artworks have found mentions in several notable publications like Forbes and Mashable. Her work received further recognition when celebrities like Taylor Swift and Kendall Jenner posed with her murals. Kelsey runs her own art brand, where trade enquiries related to her murals can be made. Her brand's website not only showcases her artwork and tells the stores behind them, but also serve as her blog space. 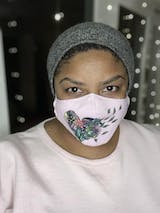